There are certain times of the year that I suddenly feel a strong sense of ineptness as a mother. The Holidays are one of them. Why? Because I can’t bake. I want you to read those words again. I really want you to understand how bad at baking I am. Even my soon-to-be four year old is suspicious of trying any sweet I produce, especially if it came from the oven. Instant things like pudding, yeah I am okay at those. I still manage to screw them up every now and then though… I won’t lie.

My inability to bake edible things stems from my aversion to following directions. I will admit that when it comes to cooking, I am as against following directions as a man is at asking for directions. What does this have to do with motherhood? Duh. Everything. Okay that’s not true. But seriously. Watch ANY holiday movie, and the women are always baking up a storm with cookies, brownies, cakes, and other sugary delights that make my mouth water. I am lucky I can make pre-made, pre-cut Toll House cookies. Even those I tend to burn to an inedible degree. Hence why I don’t cook them. (Cookie dough FTW)

Now before all you non-baking moms flay me, I am not saying that mothers who don’t bake are bad mothers, it just makes ME feel like an inept mommy. Like I just assumed that when you had children, you were downloaded with all the mommy traits, like baking. I should have known my download was busted when the whole patience thing wasn’t uploaded to my skill set, but still. I just want to bake some damn cookies with my kids! Instead, can I just go through the whole process, and then just skip the cooking part? Yes, I am talking about eating the cookie dough, or brownie dough, or cake dough. (If you lecture me on the whole eating raw egg bit, I will end you.) Is that cheating? Probably.

Part of the reason I am such a novice baker is that it requires exact amounts of things. I don’t cook that way. When I cook, I usually go based on scent. I never measure anything. I don’t even think I have a full measuring cup set, and I know for a fact I don’t have those measuring spoon thingies. I am a pretty good cook if I do say so myself. But baking… it just won’t bend to my will!

Think the kids will be okay feeding Santa meatballs? 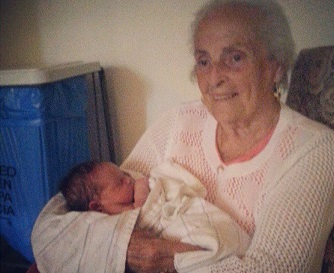 Sometimes there are people in our lives that change everything. They are a constant force of strength, of love, of inspiration. Simply having them in your life has made it that much richer, that much more invigorating. I am lucky enough to have many people like that, but out of them all there is one that is special to everyone,  my Nannie. She is sweet, fiery, sharp, and boy if you cross her you better run. (Seriously, run really really fast!)

My Nannie is one the greatest woman I know. She is someone I admire, someone I want to keep with me always. I know each and every person in my family feels the same. I mean look at that face, how could you not love that woman?

The Coolest Woman Ever Invented

My mother calls her mom, I call her Nannie, and my daughters call her Nana, she is a woman with many names. Being the Matriarch of a four generation family can’t be easy, especially since we keep popping out more girls. Luckily, she is a force to be reckoned with so she keeps us in line pretty well. Without her threatening to put me through a wall every now and then, I am sure I would not be where I am today.

So this holiday season, try to remember that the only reason you are as awesome as you are is because you had great people shaping you. And if you are not awesome, well, come meet my Nannie. She will whip you into shape in no time!

I wish the happiest of birthdays to my Nannie, who is celebrating her 85th birthday. Everything I wrote here is still true today!

I know. Before you say it, I know I had wished for Fall to come just a few months ago. The thing is, I wished for FALL. Not Winter. I dislike Winter for the most part. Yes I love the holiday season, and the happy, joyful feel, but lets face it, that ends after New Years. The worst part of winter is easily commuting in the Winter. So far we have had a few little scattered flurries, but it was enough to make each highway I have to drive on a freaking parking lot. I can only imagine my commute time when the snow actually sticks to the ground. I am not looking forward to it. I have to be at work by 9, therefore I will need to leave my house at… 6 am. Oh and getting home for dinner? Sure. If I left at 3. But no. I leave at 6. Are you seeing the awesomeness yet?

Oh sweet traffic. How I despise you.

It’s not just snow I have to worry about. There are two things worse than snow. Black ice- it’s a serious bitch- and other drivers. That’s right. If someone even thinks they see snow, they immediately turn into moron. OMG It’s a snowflake! MUST STOMP ON BRAKE AND CAUSE MULTI-CAR ACCIDENT! This may not be the exact thought process, but it might as well be. Come on people. We are New Englanders. Snow is a part of life. Get over it.

It’s amusing because in January, everyone is all ahhh! Snow! then all of a sudden March hits, and we have had snow storm after snow storm and suddenly we are all we are only getting 14 inches? What a joke. That’s not a snow storm! I could drive my Prius to work in that! (If you own a Prius, stop reading my blog. Hate those cars…) However, they still suck because they don’t know how to drive in snow.

Anyone else find this bi-polarness annoying? It makes traffic that much more irritating. How? Because this is how it goes…

Driver sees snow. Driver immediately turns into idiot and doubts his ability to drive in snow. Driver causes accident. Everyone else thinks Oh no! It must be bad out, he got into an accident! Everyone else turns into an idiot and forgets how to drive in snow. They slow down. Traffic backs up. I turn into a raging monster. I run late for work. I run late getting home. The world suddenly sucks.

Driver sees snow. Thinks this isn’t snow! Driver immediately turns into idiot and overestimates his awesomeness. Begins speeding. Driver causes accident. Everyone else thinks He must be new here, look at him! Can’t even drive in a little snow! They immediately speed up and overestimate their awesomeness. They get in accidents. Traffic backs up. I turn into a raging monster. I run late for work. I run late getting home. The world still sucks.

It’s a lose lose situation. A bit dramatic? NOT AT ALL. (Okay maybe a little…)

Seriously… Do you just say eff it and hibernate until spring when this happens?

Alright I am done with my rant, sort of. And no, it is not snowing. My car door was frozen shut this morning. I literally stood there yanking at my door trying to open it. When I finally did, the rubber part surrounding my door came off and I had to put it back. Then my windows were frozen shut and I couldn’t roll down my window to order my coffee. I actually had to get out of my car and go into Starbucks. I parked and opened my door and stepped right into a nice freezing puddle. All of this only served to infuriate me as it means winter really is coming. (cue GOT reference go go!)

I think I may hibernate this winter. And by hibernate I mean build a fort in my living room and refuse to come out until winter is over.

Pull up a chair and have a chat!

Welcome to a blog dedicated to thoughts on parenting, traveling, and much more as I clumsily make my way through this gauntlet called life.