Handling a birthday party that is not your child’s: Not fun.

My daughter is two, actually she is two and a half! As such, there are a few universal qualities that one can expect. First and foremost, everything is hers. If she likes it, its hers. If it’s purple, it is most definitely hers. If she, at one time in her short life, touched it, then its hers. As much as I try to dissuade this behavior, it seems stubbornly imprinted in her genetic code. 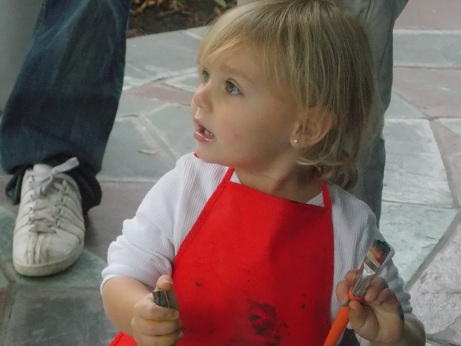 The birthday Girl: Kylie! Isn’t she just too cute?

Today we had a party for my wicked cute niece who turns two next Saturday. We had her party this week because her big obnoxious Auntie (or Tee Tee as she calls her) is selfishly getting married on the most sacred days of her little childhood. Yes, I am that cruel. In all fairness, I did buy her an adorably cute little cake that matched the top tier of my wedding cake with a pretty pink K scrawled on it, so I am not totally heartless. Anyhow, back to my original point. There were presents at this party, presents my beautiful little two and a half year old could not keep her hands off of.

“No no, Kayla those are Kylie’s presents!” Yes, there names are close, blame my sister. Then again, I have an older niece Kiley and I named my daughter Kayla so I guess you can blame me too. Getting derailed again, man I am bad at that! Despite the constant scolding, my daughter needed to get into the presents. She also just had to have the birthday girl princess tiara. Luckily Kylie was not a fan of things on her head so she did not object to my daughter swiping her crown.

My beautiful little thief with her stolen crown 🙂

After the cake fiasco passed, we came to the dreaded time that had my skin crawling from the beginning, the presents. Now I refuse to be one of those parents that goes and buys a gift for their kid simply because its another kid’s birthday and they will be getting a ton of presents. So this is how the present opening went.

Kylie opens present. Kylie gets excited for presents. Kylie opens next present. Kayla swipes recently opened present. Kylie wants swiped toy back. Mommy interferes and gives Kylie her new toy back. Kayla has a meltdown. Kylie forgets toy as next toy is opened, and conveniently so does Kayla. Then we repeat.

It was only through great patience, and quick moving parents that we were able to stop a full on toddler brawl. Well except for the plane fight, that one just sort of happened. No bruises though, and thirty seconds later they were happily playing together with all the toys. They are like sisters, Kylie and Kayla. They have a love hate relationship that looks eerily similar to the one I share with my own sister. Luckily, we have moved past the point of fighting over things… most of the time.

Have you experienced this issue with your children? What is the best way you have found to surpass the EVERYTHING IS MINE, MINE I TELL YOU, MINE! stage?

2 thoughts on “Toddlers: A Thought on Birthday Parties”

Leave a reply! I do so love to know your thoughts... Cancel reply

Pull up a chair and have a chat!

Welcome to a blog dedicated to thoughts on parenting, traveling, and much more as I clumsily make my way through this gauntlet called life.